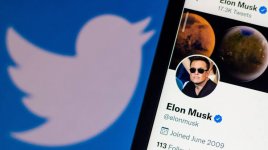 Twitter announced on Monday that it has accepted the Tesla CEO's $44 billion offer to take the company private.​

Here are 5 Things Elon Musk Will Change About Twitter:​

1. Loosen up content rules in the name of free speech​

The Tesla and SpaceX CEO describes himself as a "free speech absolutist" and has criticized what he sees as excessive moderation on online platforms.

He nodded to these beliefs in his statement announcing the purchase by saying that "free speech is the bedrock of a functioning democracy, and Twitter is the digital town square where matters vital to the future of humanity are debated."

Musk has argued that social networks should not remove comments that, while offensive, are still legal. During a recent interview at a TED conference he said, "If it's a gray area, let the tweet exist."

2. Create an edit button so users can change their tweets​

One of the most requested product changes among Twitter users is an edit button.

Musk has said he supports letting people change what their tweets say, a proposal that has stirred a heated debate among academics, journalists and other heavy users of the platform.

The fear among experts is that adding an edit button feature would be weaponized by bad actors, who could use it to cover up abuse or harassment as if it never happened, or to dupe or manipulate people.

But others say safeguards could be put in place so that tweets could be edited to clean up typos, while also showing a history of how the tweet was edited to preserve the original content.

3. Open up Twitter's algorithm to the public​

Musk has said that the software that determines what people see and how widely content spreads on Twitter should be cracked open. He supports placing Twitter's algorithm on GitHub, a site popular with programmers for sharing computer code.

While some advocates of more transparency at social media companies say the that could be a step towards greater openness, others say revealing Twitter's dense and complicated algorithm to the public would accomplish very little.

A social network the size of Twitter processes billions of pieces of content every day. How and why tweets go viral, and how Twitter's recommendation system works, is so dense and complex that the company's own software engineers can be perplexed trying to understand its logic.

Combating the proliferation of bots on Twitter — fake accounts that are programmed to respond to tweets on certain topics — is another change Musk favors.

Musk's business empire has been known to attract is fair share of bots, including bots supportive of his electric car company Tesla that attack Musk critics.

He has not said he would like to temper those kind of bots, but he has suggested that there should be a crackdown on scammy bots promoting cryptocurrency hustles.

"If our twitter bid succeeds, we will defeat the spam bots or die trying!" Musk tweeted last week, adding that he'd like to "authenticate all real humans."

Right now, almost 90% of Twitter's revenue comes from advertising, but the company has struggled to attract advertisers to the platform, which often devolves into political firestorms and ugly online brawls.

With the company going private, it will not be under the same pressure from shareholders to continually grow advertising revenue. Musk has said it should move to a subscription model.

Twitter has already taken some steps in that direction with the introduction last year of Twitter Blue, a premium service that cost $2.99 a month for addition features, like an undo button that allows for tweets to be recalled before they are sent.

Musk has said Twitter Blue should be cheaper, that if people are paying, they shouldn't have to see advertisements and that the cryptocurrency that started as a joke, Dogecoin, should be an acceptable form of payment for a Twitter subscription. Elon Musk bought Twitter. Here's what he says he'll do next

Before Twitter accepted Musk's $44 billion offer, he has floated numerous ideas for changing the social network. Not all of those proposals have been welcomed by experts.

www.npr.org
Check Your Domain Worth on CHECK YOUR DOMAIN WORTH

A
A guide to Forex Traders

Yesterday at 5:10 PM
Abdulmajid
A

May 12, 2022
Silifat
S
N
Everything you need to start growing your online business