Disgraced R&B singer R. Kelly was sentenced to 30 years in prison Wednesday, according to the US Attorney's Office for the Eastern District of New York, following his conviction last year on federal racketeering and sex trafficking charges stemming from his efforts over years to use his fame to ensnare victims he sexually abused.

Prosecutors had asked the judge to sentence Kelly, 55, to more than 25 years behind bars, while his defense attorneys asked for 10 or fewer, saying prosecutors' request was "tantamount 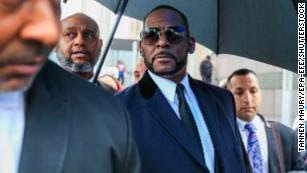 Federal prosecutors recommend R. Kelly be sentenced to more than 25 years in prison


Survivors of Kelly's abuse held hands and prayed as US District Court Judge Ann Donnelly began reading his sentence. Kelly -- who wore a tan prison uniform, dark-rimmed glasses and a black mask at the hearing in federal court in Brooklyn -- showed no emotion.

Nigerian Youths staged protests to demand the scrap of NYSC

A
AS NIGERIA'S EUROBOND TRADES AT PRICE, CONCERNS ABOUT DOLLAR SCARCITY ARISE