1. Chukwuebuka Emmanuel Amuzie, whose stage name is Brain Jotter, is a skilled actor, comedian, screenwriter, and content producer online. He started out as an online comedian before gracing various comedy stages around the country.

2. Brain Jotter was born on the 5th of February 1995 in Owerri, Imo State, Nigeria. He was born into the Amuzie family of Imo State. He, however, relocated to Ghana to get a better life, and he is fluent in speaking several languages, such as Kiswahili, French, English, Igbo Language, and Yoruba. 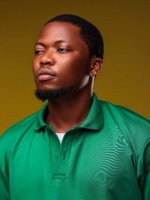 3. He had his primary and secondary education in Imo State before moving to study Business Administration at the University of Lagos. He also studied at Ghana National University.

4. Brain Jotter began his amusing career as an online comic who performed at a number of comedy shows across the nation. Later, Brain Jotter moved his comics career to Instagram.