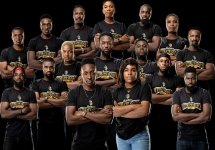 1. Name: Jennifer Okorie
Age: 22 years
State of Origin: Abia
Hobbies: Singing, Dancing & Sports
Jennifer is a student of philosophy. She runs a small fashion business. She is an athlete and loves listening to different genres of music. She swims to relax and plans to be a broadcaster at graduation.

2. Name: Esitima Edem
Age: 24 years
State of Origin: kwara
Hobbies: Cooking, Swimming and Working Out
Esitima is a graduate of accounting. She is a model and a caterer. She plans to model for a major brand. She runs an NGO which takes care of the needy by providing their basic needs (clothes, food, etc). She thinks she has all it takes to beat the world and come out tops.

3. Name: Iniabasi Umoren
Age: 26 years
State of Origin: Akwa Ibom
Hobbies: Swimming and Playing Video Games
Ini studied computer technology and now follows his passion as a singer & music producer. He was the winner of “kill Ma Beat” competition in 2018. He goes by the stage name “Saint Bond”. Ini has a black belt (Shotokan karate). He plans to entertain the viewers and says he will be the “life of the party” during the show.

4. Name: Mikel Esin
Age: 27 years
State of Origin: Akwa Ibom
Hobbies: Swimming, Reading and Travelling
Mfon enjoys the game of soccer and an ardent supporter of Arsenal FC. He likes adventure, writing and reading. He says he is a Casanova and considers himself uniquely charming. He dislikes injustice and would go to any length to ensure people are treated right. His aim is to be the Ultimate man and wants to rewrite the history of Gulder Ultimate Search with his story.

5. Name: Emmanuel Nnebe
Age: 29 years
State of Origin: Anambra
Hobbies: Swimming, Writing, Dancing
Emmanuel is a paralegal and a model. He was the face of Sapphire 2020. He is self motivated with a desire to some day be a lawyer. He plans to start a fashion school in the near future. He is writing a book and looks forward to publishing it in the near future.

6. Name: Tobechukwu Okoye
Age: 26 years
State of Origin: Anambra
Hobbies: Football & Dancing
Tobechukwu is a part time student that enjoys watching football and a fan of Real Madrid. He’s smart, creative and wouldn’t shy away from any challenge that comes his way.

7. Name: Solomon Yankari
Age: 26 years
State of Origin: Bauchi
Hobbies: Swimming, Hiking and Fitness
Solomon is a fitness instructor, a personal trainer and owns a gym in Bauchi. He loves to explore, reason why he hikes and organizes boot camps for fitness enthusiasts. He is working towards building a fitness and music community. He aspires to be successful in the fitness industry and to build a gym franchise. He also sees fitness as a way of helping people build a healthier life and to be better versions of themselves.

8. Name: Tosin Emiola
Age: 33 years
State of Origin: Osun
Hobbies: Football, Basketball & Chess
Tosin works as an air traffic control simulator officer at the Nigerian College of Aviation Technology Kaduna. He is married and has a daughter. He has mastered the art of multitasking and can read, write, speak and talk at the same time without losing concentration and has a flair for MCing and being a talk show host. This is Tosin’s 5th attempt and has finally made it to the Jungle. Tosin doesn’t plan to play second fiddle but be the Ultimate man. He is a good cook and has a fresh, organic and undiluted tomato paste business which he hopes to turn into one of the biggest brands in the country.

9. Name: Gerald Odeka
Age: 35 years
State of Origin: Delta
Hobbies: Singing, Playing Video Games and Travelling
Gerald won Gold, Silver and Bronze at the 2012 edition of the National Sports Festival and was at the World Athletics Championship in Russia in 2013. He hopes to bring good content to the show and also create a platform for himself which he plans to build on after the show.

10. Name: Orevaoghene Oboh
Age: 25 years
State of Origin: Delta
Hobbies: Adventure and Swimming
Oreva is an MC and runs his own event lighting company. He is a graduate of Electrical Electronics. He plays the bass guitar and is also a model. His dream is to grow his business and offer unique services.

11. Name: Omokhafe Bello
Age: 34 years
State of Origin: Edo
Hobbies: Travelling, Swimming, Cooking and Singing
Racheal is a good cook and likes to sing. She owns her own soap brand and a part time realtor. She is a graduate of microbiology and in her spare time indulges in her part-time passion for “tie and dye”

12. Name: Olayinka Omoya
Age: 26 years
State of Origin: Ekiti
Hobbies: Singing, Swimming, Movies and Dancing
Olayinka is an artist, a writer and a content creator. He considers himself to be jovial and down to earth and has a great sense of humour. He hopes to be an A-list musician and redefine the afro pop genre.

13. Name: Chidimma Okeibe
Age: 29 years
State of Origin: Imo
Hobbies: Swimming & Adventure
Chidimma is a Human Resources manager and a project assistant. She also functions as a digital marketer. She was a teacher and has a passion to teach the younger generation on how to make the right career choice. She believes every woman should be empowered in today’s world and supports girl-child education

14. Name: Adedamola Johnson
Age: 26 years
State of Origin: Lagos
Hobbies: Football and Swimming
Damola is a film director, a media executive and a writer. He also works as a business developer within the tech industry. He considers himself to be unique with his combination of brains and precision. He owns a motion picture company and hopes that one day his movie will be on the big screen.

15. Name: Damilola Odedina
Age: 25 years
State of Origin: Ogun
Hobbies: Volunteering, Swimming and playing football
Damilola is a cinematographer and a video editor. He has a first degree in Economics and a post graduate degree in Journalism. He believes that every gift and talent one possesses should be for the good of humanity. He values honesty and accountability and is a strong believer in God. He has a passion for sports development and hopes he can be a catalyst to transform the Nigerian sports sector to be a money spinning sector. He believes in the cause of humanity and volunteers at every opportunity he can.

16. Name: Opeyemi Ishmael
Age: 35 years
State of Origin: Ogun
Hobbies: Travelling, Video Games, Adventure
Ope is an IT expert that is working towards becoming a Scrum Master in the next one year. He plays basketball for leisure and also loves mountain climbing. Already, he has climbed three mountains and has a target to climb four mountains before the middle of 2022.

17. Name: Odudu Otu
Age: 22 years
State of Origin: Akwa Ibom
Hobbies: Basketball, Swimming and Reading
Odudu is an athlete and enjoys playing basketball. He wants to be a model and owns his own Not-For-Profit Organisation.His dream is to play basketball at a professional level and also be a business consultant. He sees Lebron James as his role model.

18. Name: Osasere Agbonile
Age: 32 years
State of Origin: Edo
Hobbies: Football and Swimming
Osas is a fitness instructor, a model and also plays football in the state Amateur league. He likes to enjoy life behind the camera as a part time actor.He is the third child in a family of five. He is a personal fitness trainer and also has an online fitness platform.Osas has a dream of owning his own NGO to cater for the less privileged, with a desire to give them hope for a better future.