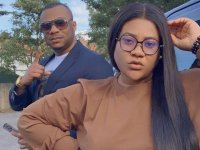 Opeyemi Falegan, the ex-boyfriend of actress Nkechi Blessing Sunday has dismissed claims that he apologised to her because he wants her back, IGBERETV reports.

On Monday May 9, 2022, Opeyemi had an IG live session with OAP DaddyFreeze where he publicly apologized to Nkechi after they dragged each other over their breakup. He told her he loves her and also asked her to forgive him.

"I apologised for different reasons. I apologised because I wanted bygones to be bygones. Not because I want her back..for what? Do you know why I left? I left for a different reason. Personal hygiene. You have to tell a woman to change her panties in three days? You have to tell a woman to brush her teeth in the morning? After the whole thing everywhere is messed up...You want me to manage that? No I wouldn't''

Responding to his claims via her Instastories, Nkechi described them as a ''mighty lie''. According to her, she doesn't have any panties, doesn't wear and has never worn a pant since she was 18.

N
Learn SEO And Optimize Your Website Step By Step

Yesterday at 11:27 AM
NL SOFT
N
N
Why Don't You Grab A Skill On Tech, Learn Mobile App Development

Steps To to Verify Your Google AdSense Account Without Pin