A CALL TO ALL PARENTS!!!

My daughter is six years old and is in grade one. We live about a kilometer away from school so everyday okada man whom we are familiar with takes her to school and returns her home in the afternoon because both my husband and I are working and we leave home early, just after she goes to school.
One day when I was at work I received a call from her class teacher requesting me to avail myself there as soon as was possible.

“What happened to Angel?” I questioned anxiously.

“Nothing to panic about, just make sure you come before we break up for the day.”
Of course I panicked. This had to do with my daughter and I was worried sick about her. I immediately excused myself from work and hurriedly took the first transport available. I burst into the classroom panting and sweating.

“Mama Angel,” The teacher started. “We will talk about this privately.” She led the way to an empty office and I followed meekly.
“Do you see your child off when she comes to school?” Was her first question.
I didn’t know where this was leading to, so I just replied with a short “Yes.”

“I want you to brace yourself with what I’m about to tell you.

Did I really have a choice? I just nodded.

“Angel arrives here around 8:30 every day,” she started calmly. “For some time, she has been coming to school in tears every morning. First I thought it was because she didn’t want to come to school. Several times I asked her what the matter was but she didn’t give me a reply. Today when she arrived she was crying as usual so I took her aside, gave her some sweets and promised her some more tomorrow.

Then I asked her in a very friendly tone why she cries every day and the answer shocked me.”
She took a breath while looking at me and the anxiety almost killed me.

“Mama Angel,” she continued with caution. “The okada man has been raping your daughter every morning for some time now.” 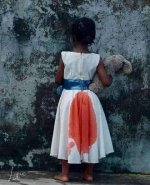 “What!” I almost fainted. I surely would have fallen down if I had been standing. For God’s sake, Angel was only six! How heartless can some men be?
“Every day after picking her and before coming here, he would take Angel to his house, rape her and threaten to kill her if she ever tried to tell anyone. Then he’d bring her to school.”

I felt dizzy. Why? Why my little Angel? I was sweating. My whole body was shaking.
“Should I call your husband?”
“No!” I shouted. He might do anything.

Patience was something alien to him. I had to find a way of breaking the news to him. After a while, I decided to call his sister. Together we could try to talk to him.

The news shattered my husband. He cried uncontrollably. Then he got so furious that he swore he would strangle him, but we told him not to take matters into his own hands and just leave the law to do its work. We reported the matter to the police. We gave them the details of the boda boda man. They caught and took him in. We took Angel to the hospital after getting a p3 form from the police.

He was found guilty of raping our little girl a multiple number of times and was sentenced to a twenty year jail term.

Absolutely no one should be trusted with our girls. Take time to drop your kids to school, be friendly with them, teach them to be polite but never to trust strangers, ask them about their day and always make them trust you enough to open up in case of any unusual incident.

Parents need to learn from this story, pity the poor girl

worst is that another similar story will happen tomorrow

Today at 8:06 AM
NL SOFT
N
N
If You Keep Doing This Life Maybe Harder For You. Kill Poverty Now.