Sultan of Sokoto, Muhammadu Sa'ad Abubakar, has declared the first day of Shawwal

His Eminence the Sultan of Sokoto, Muhammadu Sa'ad Abubakar, has declared Monday, May 2, as the first day of Shawwal. For now, the National Moon Sighting Committee (NMSC) said reports on the sighting of the new moon from seven states are negative. 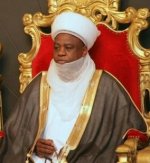 Shawwal is the tenth month of the lunar-based Islamic calendar. Shawwāl stems from the verb shāla which means to 'lift or carry', generally to take or move things from one place to another, so named because a female camel normally would be carrying a fetus at this time of year.

Aduragbemi has been declared missing in Ogun state

All Nigerian Telephone SIMS Not Linked To NIN Have Been Partially Deactivated.