Nigerian talent Isah Barde, who lives in Kano, northwest Nigeria, has built a moving robot that caught many people's attention, including the federal government The 17-year-old Kano boy has been awarded a scholarship to study computer engineering at the Baze University in Abuja by NITDA Barde said that this is just the beginning as he aspired to build bigger and better robots while lamenting that he could not have access to some high-powered materials to actualise his aspiration .

Kano - The 17-year-old Isah Barde, who lives in Kano, northwest Nigeria, is one of the good people that can tell the good side of coronavirus in their narrative, as they get some ginger to do something that put them in the public space.

The young boy designs a robot with cardboard, and it is moving, BBC Pidging reported.

Isah has been interested in invention right from childhood. He revealed that he started by designing tractors and excavators before deciding to build a robot.

Being a secondary school student, Isah said he got his inspiration from movies and online videos. It is from these that he decided to start building a robot. Isah just got a federal government scholarship to study computer engineering at Baze University in Abuja, the Nigeria capital. 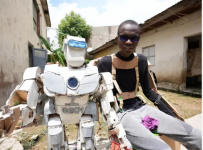 iOS 16 is now available to download for iPhone users