THE FACE OF SARAH BAARTMAN

The story of Sarah Baartman of South Africa who had an unusual long backside.

Sarah Baartman, also known as Saartjie Baartman, was a Khosa woman who was born in South Africa in the late 1789. She is famous for being exhibited as a freak show attraction in Europe in the early 18th century because of her large buttocks, which were considered unusual and exotic at the time.

Baartman was born in the Gamtoos Valley, in what is now the Eastern Cape province of South Africa. She was a member of the Khoikhoi, a group of indigenous people who lived in the region. As a young woman, Baartman was taken from her home by a British ship's doctor, William Dunlop, who promised her work as a servant in Cape Town. However, instead of being employed as a servant, Baartman was taken to England and exhibited as a sideshow attraction under the name "Hottentot Venus."

Baartman's large buttocks and elongated labia were considered unusual and exotic, and she was put on display in London and Paris, where people paid to gawk at her. She was also made to perform various tricks, such as dancing and singing, for the entertainment of spectators. Baartman was treated poorly during this time and was not paid for her performances.

Baartman died of Syphilis in 1815 at the age of 26. She was sexually assaulted multiple times and her captors paid in exchange to experience ssehura also know by stage name The Hottentot venus , and her remains were dissected and put on display in a museum in Paris. In 2002, the South African government successfully campaigned for the return of Baartman's remains to South Africa, and she was finally laid to rest in 2002.

Baartman's story is a tragic one and serves as a reminder of the exploitation and mistreatment of people of color throughout history may she rest in eternal peace... 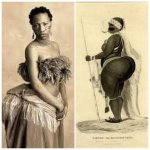 Four types of intelligence according to psychologists