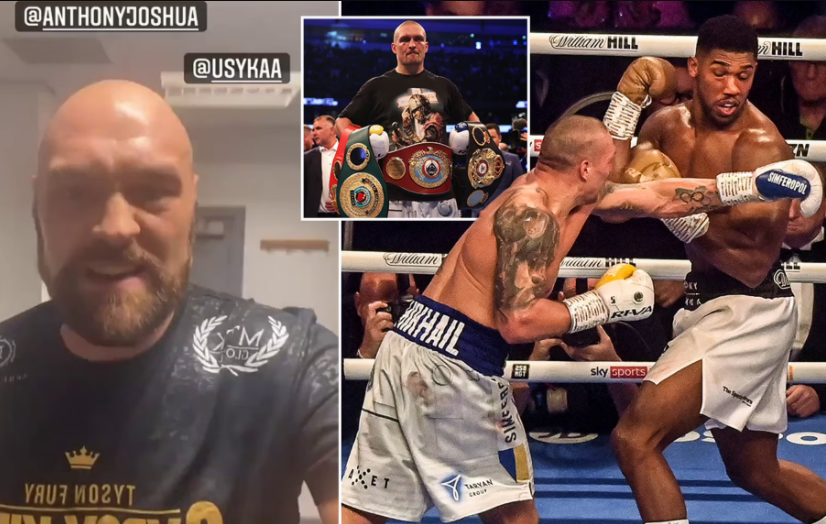 Tyson Fury has taken a swipe at his heavyweight rival Anthony Joshua for losing his belts to Oleksandr Usyk during their fight last year. During the fight in London, Joshua was battered and bruised at the hands of the Ukrainian at the Tottenham Hotspur Stadium last year. And, taking to social media last night, the Gypsy King mocked AJ, labelling him a 'big useless dosser' for allowing Usyk to take away his straps. You know what I can't believe, that AJ has gone and given Ukraine all the heavyweight belts back after all my hard work in stealing them,' he said on Instagram. 'You big useless dosser. 'You let a little man come up from middleweight and set about you and take all your belts. Now it is going to take a real British Lancaster Bomber like me to go and bring the belts back to Britain! 'You are useless dossers. Honestly bring them to me. I am the "Gypsy King". Bring them to me and I will put them in their place.'[email protected] @usykaa pic.twitter.com/6DesK8peGw— TYSON FURY (@Tyson_Fury) January 11, 2022 Meanwhile, Fury and Dillian Whyte have been given another week by the WBC to reach an agreement over their purse split ahead of a potential world title fight. Whyte is now the mandatory challenger, and the interim champion, after beating Alexander Povetkin in their rematch last March. The post Tyson Fury takes a swipe at Anthony Joshua for losing all his titles to Oleksandr Usyk appeared first on Linda Ikeji Blog.

N
If You Keep Doing This Life Maybe Harder For You. Kill Poverty Now.

I am not a drug trafficker. If I were, they wouldn't have allowed me go free - Skitmaker De General says after regaining his freedom from NDLEA custod

I was never informed of wrongdoing before Bauchi Emirate Council â Former Speaker, Yakubu Dogara reacts to being stripped of his traditional title