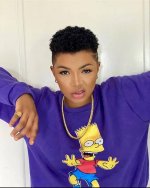 From indications, Liquorose the fast-rising video vixen, energetic dancer and creative director is set to make history as the first ‘Shine Ya Eye’ housemate to hit the one million mark on IG
While Liquorose is mostly known to dance alongside her group members, her Instagram page shows that she’s also a force to reckon with when she’s dancing solo.

Born Roseline Omokhoa Afije, Liquorose is fast becoming one of the favourite housemates of the BBNaija Season 6 show.

Liquorose is a professional dancer and member of the famous dance crew – Girls Got Bold (GGB), popular on social media for their energetic moves to trending songs.
The reality tv star who is not new to the screens is a native of Edo State, born on 31 March 1995 in Surulere, Lagos State.

Liquorose alongside other members of her dance crew (E4ma and Ellaley) has featured on several projects.