Dogecoin - What to know about Dogecoin

Dogecoin (DOGE) is a peer-to-peer, open-source cryptocurrency. It is considered an altcoin and an almost sarcastic meme coin. Launched in Dec. 2013, Dogecoin has the image of a Shiba Inu dog as its logo. 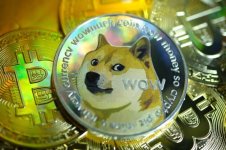 While it was created seemingly as a joke, Dogecoin's blockchain still has merit. Its underlying technology is derived from Litecoin. Notable features of Dogecoin, which uses a scrypt algorithm, are its low price and unlimited supply.

Dogecoin started as something of a joke, but after it was created, it gained a following. By late 2017, it was participating in the cryptocurrency bubble that sent the values of many coins up significantly.1 After the bubble burst in 2018, Dogecoin lost much of its value, but it still has a core of supporters who trade it and use it to tip content on Twitter and Reddit.2

Users can buy and sell Dogecoin on digital currency exchanges. They can opt to store their Dogecoin on an exchange or in a Dogecoin wallet.


The History of Dogecoin​

Jackson Palmer, a product manager at the Sydney, Australia office of Adobe Inc., created Dogecoin in 2013 as a way to satirize the hype surrounding cryptocurrencies. Palmer has been described as a "skeptic-analytic" observer of the emerging technology, and his initial tweets about his new cryptocurrency venture were done tongue-in-cheek. But after getting positive feedback on social media, he bought the domain dogecoin.com.1


Meanwhile in Portland, Oregon, Billy Markus, a software developer at IBM who wanted to create a digital currency but had trouble promoting his efforts, discovered the Dogecoin buzz. Markus reached out to Palmer to get permission to build the software behind an actual Dogecoin

Markus based Dogecoin's code on Luckycoin, which is itself derived from Litecoin, and initially used a randomized reward for block mining, although that was changed to a static reward in March 2014. Dogecoin uses Litecoin's scrypt technology and is a proof-of-work coin.4


Palmer and Markus launched the coin on Dec. 6, 2013. Two weeks later on Dec. 19, the value of Dogecoin jumped 300%, perhaps due to China forbidding its banks from investing in cryptocurrency

Dogecoin is a peer-to-peer, open-source cryptocurrency that is categorized as an altcoin. Started in 2013 as a joke, Dogecoin has a loyal fanbase.