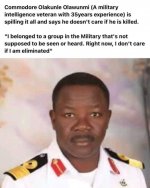 The DIA, which is the primary military intelligence agency of Nigeria, had reportedly declared Olawunmi wanted over contents of an interview he granted Channels Television.