Giannis Antetokounmpo hungers for NBA title with Bucks on the brink 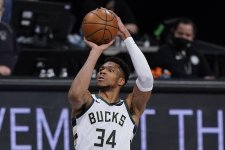 Giannis hungers for NBA title with Bucks on the brink

The 26-year-old Greek star forward, a two-time NBA Most Valuable Player, can move beyond past playoff failures and win his first crown with a victory in Tuesday’s sixth game of the NBA Finals at Milwaukee.

“It means a lot,” Antetokounmpo said. “But I can’t get too carried away. I have to stay in the present. I can’t worry about the outcome.

“We know what the deal is. It’s one game away from being an NBA champ, being in the history of this game, being always there. Nobody can take that away from you. It’s going to be big.”

The Bucks lead the best-of-seven showdown 3-2 and can win their first crown since 1971 before a noisy sellout crowd with 25,000 more people packing the “Deer District” and watching on screens outside the arena.

“It’s going to be amazing to do it in front of our fans,” Antetokounmpo said. “But there are more steps until we get there.

“When the game starts, we have to take it a possession at a time and hopefully we can be in a position to win.”

“We’ve really just got to lock in, not get too high, not get too low,” Holiday said. “You’ve got to give it your all. At this point there’s no excuses.”

Antetokounmpo led the Bucks to the NBA’s best record the previous two seasons only to see Milwaukee make disappointing playoff exits, dropping four in a row to Toronto in 2019 and losing to NBA runner-up Miami in 2020.

“What we’ve been through the last couple years, it has prepared us to be in this moment,” Bucks coach Mike Budenholzer said. “It’s just part of our journey and we’ve still got a ways to go.”

Antetokounmpo stresses the work yet to come.