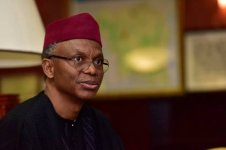 The Governor of Kaduna State, Nasir El-Rufai, on Wednesday, relieved nineteen political appointees of their duties.


The El-Rufai-led government disclosed that the development is the first phase of political appointees to be sacked.

The Kaduna Government has been called out by Nigerians for sacking thousands of civil servants due to his policy.

The state government which had defended its policy noted that it would not continue to pay over 80 percent of its allocation from the federation account to civil servants and assured that the political appointees will also be affected in the exercise.

Among the political appointees affected by the disengagement are the Deputy Chief of Staff and two special advisers.