Nigerian Celebrity that are into politics 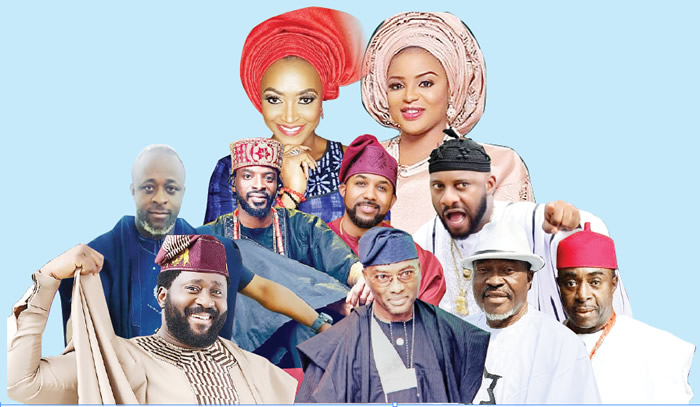 Since Nigeria returned to the democratic system of governance on May 29, 1999, several entertainers have run for elective positions, while some have been offered public appointments. NOAH BANJO takes a look at some of them
Desmond Elliot
In his heyday as an actor, Desmond Elliot was usually cast as a lover boy, alongside the likes of Ramsey Nouah and Jim Iyke. But as of today, Elliot is mostly found in the Lagos State House of Assembly, where he represents Surulere Constituency I.
Elliot got into the House in 2015 as a candidate of the All Progressives Congress. He was reelected for another term in 2019.
Although politics takes most of his time now, the actor-cum-politician who has starred in numerous Nollywood movies and soap operas once stated in an interview that he still acts and makes things happen behind the camera.
Recently, the 47-year-old state legislator came under fire for his comments regarding the #EndSARS protests and the Lekki toll plaza shootings. On the floor of the House, he had labelled the protesters and other social media commentators as ‘children’. Though he later tendered an apology, many youths on social media still enjoy ‘trolling’ him.
Kanayo O Kanayo
Veteran actor, Kanayo O Kanayo, is undoubtedly one thespian who knows his onions. Known for playing the role of an occultist in several movies, he has been in the movie industry for over two decades.

Kanayo first hit prominence when he starred in the movie, ‘Living in Bondage’. He has since featured in over 100 movies. In 2014, he was honoured with the Member of the Order of the Federal Republic.

Ahead of the 2019 elections, Kanayo surprised many when he declared his intention to contest a seat in the National Assembly to represent Ahiazu/Ezinihitte Mbaise Federal Constituency of Imo State under the umbrella of the All Progressives Grand Alliance.

Unfortunately, the 59-year-old, who recently qualified as a lawyer, did not garner enough votes to win the election.

It is not a secret that many in Nigeria’s entertainment industry consider Dayo ‘D1’ Adeneye to be a pacesetter. Many Nigerians first got the opportunity to follow activities of the prestigious Grammy Awards when him and his partner, Kenny Ogungbe, used to travel to California, United States of America, to cover the event. From Primetime TV to Kennis Music, the showbiz personality can be said to know the music industry like the back of his hands.

However, with all the successes he had recorded in the entertainment industry, Adeneye still sought to contribute his quota to the development of the nation by getting involved in politics.
As a member of the All Progressives Congress, he contested a seat in the Ogun State House of Assembly to represent Odogbolu Constituency in the 2015 elections. He, however, lost at the primaries. In what many interpreted to be a compensation, he was selected as part of the Media and Publicity Committee for the second term campaign of the immediate past Governor of Ogun State, Ibikunle Amosun.

Following the governor’s second term victory, Adeneye was appointed as the Commissioner for Information and Strategy in the state. A second attempt to represent the Odogbolu Constituency on the platform of the Allied Peoples Movement was futile as well.

In the history of songs that could qualify as anthems of sort in Nigeria, ‘Gyrate’ by Tony One Week was so huge that it has remained a top song to celebrate the country’s national football team, the Super Eagles. However, Tony did not just stop there. He went on to feature in Nollywood, appearing in quite a number of movies.

Not satisfied with being relevant in the entertainment industry, Tony also ventured into politics. In 2011, he was elected into the Anambra State House of Assembly to represent Idemili North Constituency on the platform of the defunct Action Congress of Nigeria. Now a member of the All Progressives Grand Alliance, he was appointed as the Special Adviser on Diaspora Affairs, Indigenous Arts, Culture and Tourism to the Anambra State Governor, Willie Obiano.

Known for her brilliant portrayal of roles, Kate Henshaw is loved by many. She made her onscreen debut in the movie, ‘When the Sun Sets’ in 1993. Many years after joining the world of make-believe, the graduate of Medical Microbiology from the Lagos State University is still a force to reckon with in Nollywood

In 2008, she won the Africa Movie Academy Award for ‘Best Actress in a Leading Role’ for her performance in the film, ‘Stronger than Pain’. In 2011, she was honoured by the then President Goodluck Jonathan as a Member of the Order of the Federal Republic.

Beyond appearing on TV, Henshaw also has a political ambition. She contested a seat to represent the Municipal/Odukpani Federal Constituency of Cross River State at the National Assembly in 2015 under the People’s Democratic Party. However, she lost out at the party’s primary. Later that year, the Cross River State Governor, Ben Ayade, appointed her as a Special Adviser Liaison, Lagos.

Not many actors are lucky enough to be launched into the limelight after acting in just one movie. But, Bob-Manuel’s character in the popular television series, ‘Checkmate’, that aired from 1991 to 1994.

Since then, Udokwu’s career has enjoyed a steady rise, having appeared in hundreds of movies. In 1998 he was named the ‘Best Actor in a Supporting Role’ for his character in ‘Checkmate’ at the Thelma and Reel Awards. In 2014, he was presented with a Special Lifetime Achievement Award at the African Movie Academy Awards.

In the 2015 elections, Udokwu, a member of the All Progressives Grand Alliance, contested a seat in the Anambra State House of Assembly to represent Idemili North Constituency, but he was unsuccessful. Before that, he was a Special Adviser to a former Anambra State Governor, Peter Obi, on Nollywood and Entertainment.

9ice
In 2008, Abolore Akande, popularly known as 9ice, had one of the biggest songs in the country. Titled, ‘Gongo Aso’, it was an anthem of sorts that was loved by both the young and old.

In 2014, 9ice, under the umbrella of the All Progressives Congress, announced his intention to run for a seat in the Oyo State House of Assembly to represent the Ogbomosho South, North and Orire Constituency of Oyo State. However, he lost out at the party primaries.

Following the loss, he was appointed as a Special Adviser on Youths to the former Governor of Oyo State, Abiola Ajimobi.

Not many saw Bankole Wellington, aka Banky W, beyond being a singer, until he decided to expand his tentacles to Nollywood. It then became clear that the young man was not content with being just a singer.

Though he had been involved in a couple of humanitarian activities, it still took many by surprise when the self-acclaimed ‘Mr Capable’ signalled his intention to get involved in politics.

In 2019, Banky W contested a seat in the National Assembly to represent the Eti-Osa Federal Constituency of Lagos State. Running on the platform of the Modern Democratic Party, he lost the election but he managed to win some polling units. He was also applauded by many youths, who praised him for taking the bold step of getting involved in politics without having any known godfather or political establishment behind him.
Tony Tetuila

Many might not know him as Anthony Awotoye, but the name Tony Tetuila will surely ring a bell. A former member of the defunct pop group, The Remedies, Tetuila later went solo and became a household name in the country. He gained national popularity with his hit song, ‘My Car’ released in 2001.

Though he has been missing from the music scene for some time, Tetuila is paying much more attention to politics.

In 2015, he contested a seat to represent Iropodun Local Government Area at the Kwara State House of Assembly. However, the All Progressives Congress member lost out in the primaries.

Actor, Yul, takes after his father, Pete Edochie, but apparently not in all aspects. Though they are both actors, the younger Edochie is a politician, who has constantly spoken about his desire to one day become the President of Nigeria.

Edochie contested the governorship election in Anambra State in 2017 on the platform of the Democratic People’s Congress, but he lost after garnering only 145 votes. After the election, he was appointed as a Senior Special Adviser on Creative and Entertainment Media to the Governor of Anambra State, Willie Obaino
Funke Adesiyan

Starting her career at a young age, Funke Adesiyan, has appeared in quite a number of Yoruba movies.

On the other hand, her foray into politics became prominent when she was part of the team that ‘ran’ the presidential campaign of a former Minister Education and two-term Kano State Governor, Ibrahim Shakarau.

During the 2015 general elections, Adesiyan ran for a seat in the Oyo State House of Assembly on the platform of the All Progressives Congress to represent Ibadan South East State Constituency II. Despite scaling through the primaries, she lost out in the main elections, and she claimed that her mandate was ‘taken’ from her.

However, in 2018, she was appointed as the Director of Entertainment and Creativity for the APC Presidential Campaign. Subsequently, she was named the Personal Assistant to the First Lady (Aisha Buhari) on Domestic and Social Events.