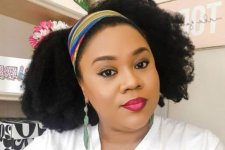 The 43-year-old mother of two shared her story while explaining why she had been calm about the recent rape issue.

Here is what she said;

“I was eight years old, I couldn’t talk about it for years because it traumatized me, nobody knew; I was dealing with it myself. Why couldn’t I talk, I knew what happened to others who had spoken up about it, they were disgraced; if you see the shame, even in school, once the word got out, it was about her being a prostitute even as young as we were, they would call you names, so man as seen you?”

In the latter part of the session, Damasus stated;

Man has touched you? It’s not about what you’re going through, at the end of the day you spend years dealing with your trauma and we are not in a society that believes in “oh! Go and see a therapist to talk about it for counseling,” said Damasus.

Stella Damasus revealed that she has since healed after going for counseling.

"I Was Raped By A Relative At The Age Of 8" – Veteran Actress, Stella Damasus Reveals - Gistmania