What sparked the latest conflict between Israel and Gaza 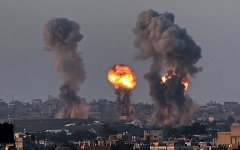 The fighting between Israel and Palestinian militants in Gaza - now in its second week - is the worst violence in the Holy Land in years and shows little sign of abating. ​

The origins of the latest violence, which erupted last Monday, lies in a series of incidents in Jerusalem over the past month.
Last month extreme right Israelis marched through East Jerusalem chanting “Death to Arabs” amid tensions over Ramadan restrictions and videos online showing Palestinian attacks on Jews.
The looming eviction of Palestinian families from the Sheikh Jarrah neighbourhood in East Jerusalem to make room for Israeli settlers has further inflamed anger. Israel describes it as a property dispute but critics describe it as state-sponsored ethnic cleansing.
And during the Muslim holy month of Ramadan that ended last Thursday, Israeli police restrictions at Al-Aqsa mosque, the third holiest site in Islam, led to clashes with Palestinian worshippers.

Clashes around the al-Aqsa mosque compound have seen Israeli police firing rubber bullets, tear gas and stun grenades at a site that is also revered by Jews and Christians. The compound is also home to the Dome of the Rock and the site of the biblical Jewish temple, of which only the Western Wall remains.
Control over Jerusalem in general and the holy hilltop compound in particular are an especially emotive issue for many Jews and Palestinians.


What has happened so far?​

Since Monday Hamas and other Palestinian militant groups in the Gaza Strip have fired nearly 3,500 rockets towards Israel, targeting civilian centres including Tel Aviv and Beer Sheva.
Israel’s Iron Dome missile defence system has intercepted most of the rockets but 12 people in Israel have been killed and communities forced to spend days on end in bomb shelters.
Israel has responded with hundreds of air strikes on Gaza, a densely populated and built up coastal strip in which the militants have embedded themselves within civilian populations.
The intense bombing campaign has killed 213 Palestinians, including 61 children, and wounded more than 1,400 people in Gaza, according health officials there.
So far, Israel has stopped short of a ground offensive of Gaza, even as Hamas continued to bombard the Jewish state with rocket fire.
But the Israeli military says the air strikes will continue for now.
"The IDF (Israel Defence Forces) is not talking about a ceasefire. We're focussed on the firing," Israeli military spokesman Hidai Zilberman told Army Radio on Tuesday. 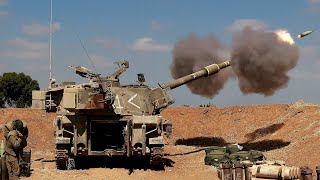 Will the conflict get worse?​

US President Joe Biden said on Monday that he supported a ceasefire but so far his call has gone unheeded as more people were killed on both sides on Tuesday.
Heavy air strikes and rocket fire have intensified again after a brief lull as Palestinians declared a "day of anger" with a general strike and protests in Jerusalem and the occupied West Bank.
As the death toll rises, reining in the conflict will become more difficult and on the ground rhetoric by some Israeli and Palestinian leaders has reflected the high levels of communal animosity.
A ceasefire agreement will need to allow both sides to claim victory, analysts say, a tricky provocation given that Hamas is demanding that Israel stops evictions in Sheikh Jarrah and keep Jews away from the Temple Mount, which are both politically sensitive issues for the Israeli government. 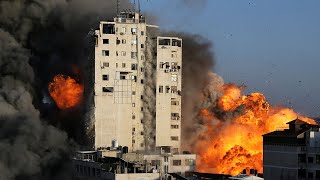 What could happen next?​

Diplomatic efforts to push for a ceasefire are growing, with a series of regional meetings and emergency summits at the United Nations and European Union scheduled for Tuesday.
The EU talks are expected to call for a ceasefire, offer more humanitarian aid and try to relaunch peace talks.
After a ceasefire, the EU would "work with the United States, work with Russia to try and deal with the situation,"Malta's Foreign Minister Evarist Bartolo said.
Israel announced on Tuesday that it would open its main border crossing with Gaza to allow the passage of essential humanitarian aid on Tuesday, which the United Nations hailed as a positive development.
But a convoy of international aid trucks that started rolling into Gaza through the Kerem Shalom border crossing was halted when Israel quickly shuttered it again, citing a mortar attack on the area. The crossing has now been closed since last Sunday, restricting the flow of medical supplies and other lifesaving equipment.
An important part of previous ceasefire agreements has been Israel easing its blockade on the Palestinian enclave in return for Hamas halting rocket fire from Gaza.

Israeli-Palestinian conflict explained: why is there violence in Gaza and Jerusalem?