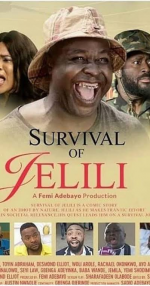 The release of a new Jelili film is sure to make the audience laugh. The comedy movie, Survival of Jelili will tell the story about how Femi Adebayo (Jelili) finds himself in various hilarious situations while trying to find social relevance and fame. Funny actors like Toyin Abraham, Rachael Okonkwo, Desmond Elliot among others are cast for this great Nollywood project!

The comic story initially had released in Nigerian cinemas on December 6, 2019, after which it got its Netflix premiere on July 8, 2020.

Opinion: Why Biggie did not Evict Sheggz

A
Comedy TV Series SOS Life Is A Beach On Nolly Africa!