The Killer Taste
*MAGGI*
The famous poison that quickly makes Africans widows or widowers is The Maggi cube. It was created in 1886 by the Swiss Julius Maggi for poor workers who had difficult social situations and who did not eat properly because meat and fish were very expensive. In order to provide a taste of meat and fish to these poor Europeans, Julius Maggi imposed the Maggi cube with its famous red and yellow colors on the packaging.
In 1886, after the Berlin conference, colonizers were allowed to export whatever they wanted to their colonies which were mostly in Africa. This was how Julius Maggi thought that if there were people who could not buy meat or fish in Europe it therefore would be worse in Africa. So he exported and ingeniously launched his advertising with the yellow and red colors that competed with the red and white colors of the Coca Cola brand at the time.
He succeeded because maggi cube product can be kept longer at higher temperatures and with the possibility of giving meat or fish taste whenever used.
As early as 1910 and to this day, Africans began & continue to put it in every dish.
hundred million cubes are sold every day throughout Africa to such an extent that to avoid import problems The Swiss have created eleven factories in the continent despite the public health risk of it containing 40% Salt. Consuming the Maggi cube every cooking day is akin to increasing cardiovascular risks including hypertension, diabetes and ... especially stroke (cerebrovascular) Sneakily and unmistakably, the Maggi cube is one of the primary cause of stroke in Africa. 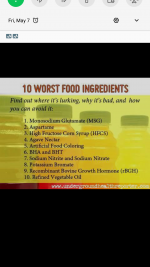 Here are the better options you can use in making ur owns seasoning.

*Ingredients to make natural spices for all cooking*

Wash your dry ginger, turmeric and garlic well because of dust from the seller, sundry it. Break the african nutmeg and remove the seed, roast it for 2 minutes on a low heat to get the aroma.

Blend all ingredients together with a fine dry blender or take to the dry mill.

Enjoy your natural curry or spice

Here is a short video on that.