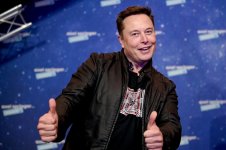 The value of dogecoin (DOGE) plummeted from record highs after Elon Musk’s Saturday Night Live (SNL) appearance, disappointing investors who tried to push the coin to $1 (£0.72).

Analysts had expected the Tesla (TSLA) CEO or the "Dogefather" to mention the meme-inspired crypto on SNL and send prices spiking, instead his plug saw the coin crash nearly 25% from $0.69 to $0.48 a few minutes into his stint.

Dogecoin continued to lose its gains from last week on Sunday, currently trading 33% lower to $0.47.

Flagship crypto, Bitcoin (BTC-USD), which has been up and down in recent days and struggling to keep up its record highs, was down 2.2% to $57,894.

Bucking the downward spiral, Ethereum (ETH-USD) — the second largest cryptocurrency — took off on the decline, rising over 11% to record highs of $3,958.

Chart: Yahoo Finance
Cryptocurrencies have been gaining more popularity in recent months after a number of financial institutions and well known investors threw their weight behind crypto and blockchain technologies, sending prices skyrocketing.

While this has been great for its prices, it has also put it under the watchful eyes of governments and regulators who want to hone in on the sector amid rising demand.

Bailey said cryptocurrencies have no "intrinsic value" and people who invest in them should be "prepared to lose all [their] money."

"Investing in cryptoassets, or investments and lending linked to them, generally involves taking very high risks with investors’ money," the Financial Conduct Authority said in January.


Last week, popular exchange Gemini announced support for dogecoin, after eToro added it to its online trading app on Tuesday.

This helped push its market cap to over $70bn earlier in the week to become the fourth-most valued coin, according to Coinmarket. This was bigger than the market cap of COVID vaccine producer Moderna (MRNA), as well as Ford Motor Company (F) and oil giant BP (BP.L).

For context, it took tech stalwart Amazon (AMZN) over a decade to deliver a 10,000% return to investors. It has taken dogecoin just five months.

As well as getting support from the SpaceX founder, dogecoin has also been backed by rapper Snoop Dogg and Kiss bassist Gene Simmons.

Musk invested $1.5bn in bitcoin, in February, and said Tesla may even start accepting it as payment for its products.

Analysts had expected the Tesla CEO or the 'Dogefather' to mention the meme-inspired crypto on SNL and send prices spiking, instead his plug saw the coin crash nearly 25% from $0.69 to $0.48.